On this page we present some imagens, videos, drawings, and other stuff about our research. This is divided by sections that correspond to case studies and experiments. In order to browse through VRML models you should download and install cosmo player.

Terrestrial Laser Scanning is a fairly recent technology. It is an active technology that uses laser light to measure. There are three types of systems: time of flight, phase comparison, and triangulation. Time of flight and phase comparison systems are best suited for the production of documentation of buildings and triangulation systems more suited to smaller-scale objects. Below are some images and vídeos of the case studies where that have been applied such techniques. 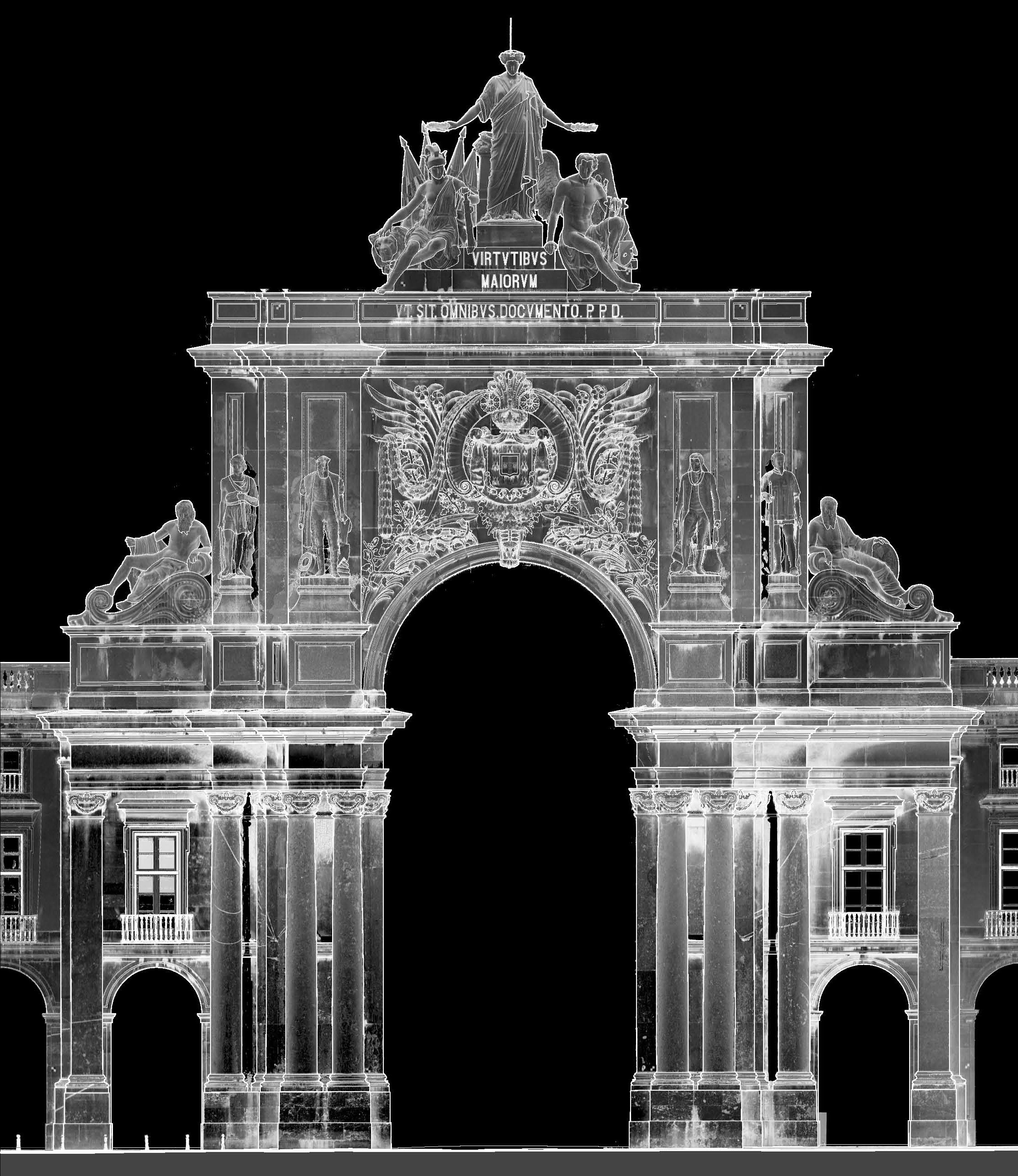 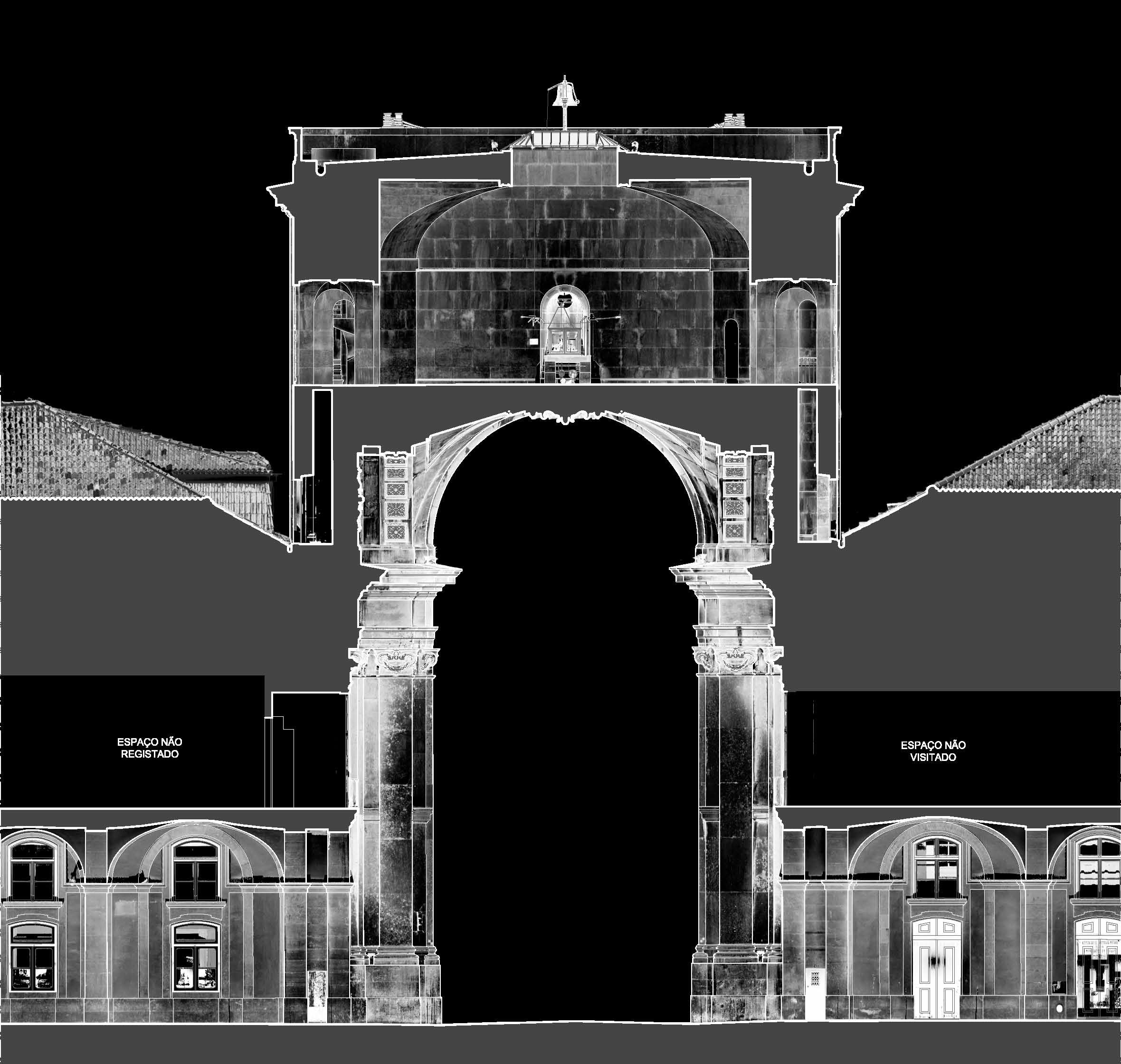 It was explored the fact of having three-dimensional information to improve the quality of measurements of the object and placing hypotheses on the geometry of the construction systems. The following images show what we called selective modeling. That is, modeling directed to specific purposes which need not be full modeling of the building. 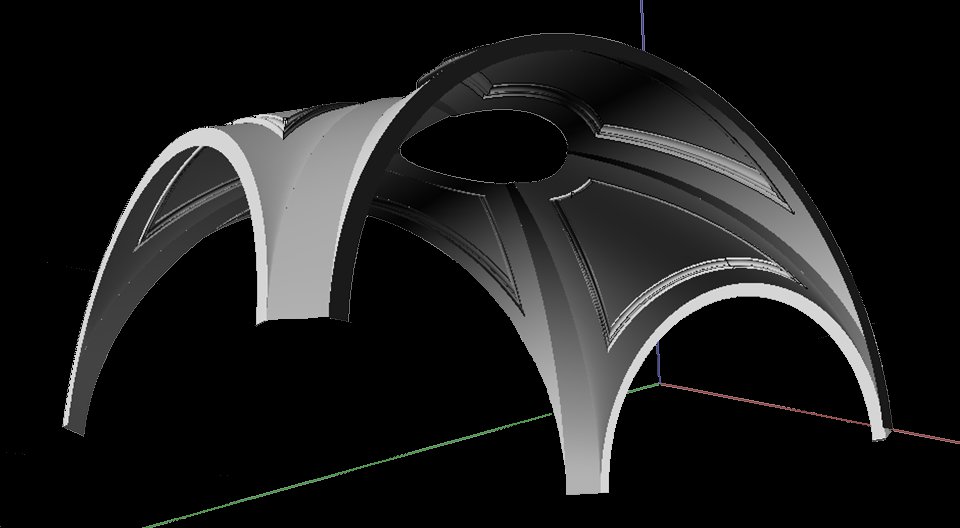 We carried out several 3d scanning surveys in the Convent of Christ at Tomar, namely outside the Nave Manuelina, in the Pátio dos Carrascos and in Paços do Infante. The images shown below refer to the lifting of the Nave Manuelina. This survey was done in order to produce the documentation to serve as basis for the conservation project of stone masonry. 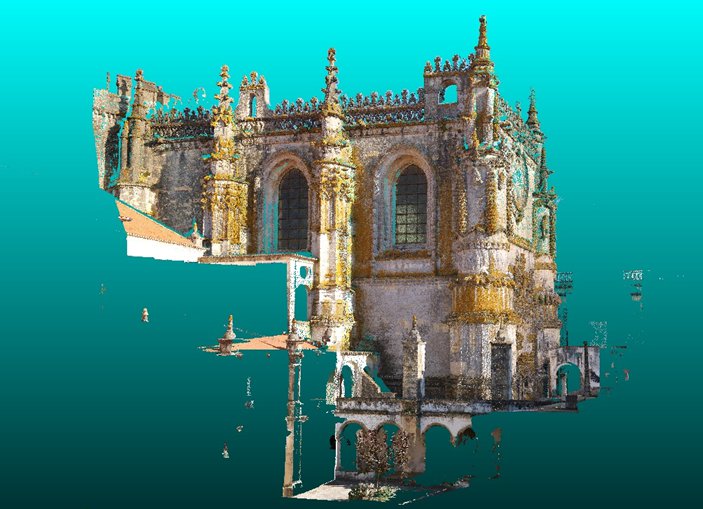 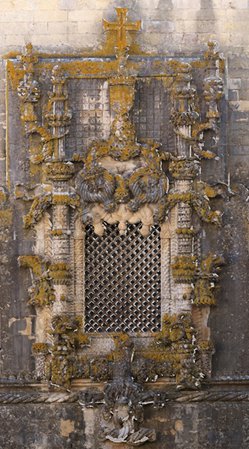 From this experience we emphasize as more relevant the processing of multiple reflectance images of laser scanning to the analysis and diagnosis of anomalies. 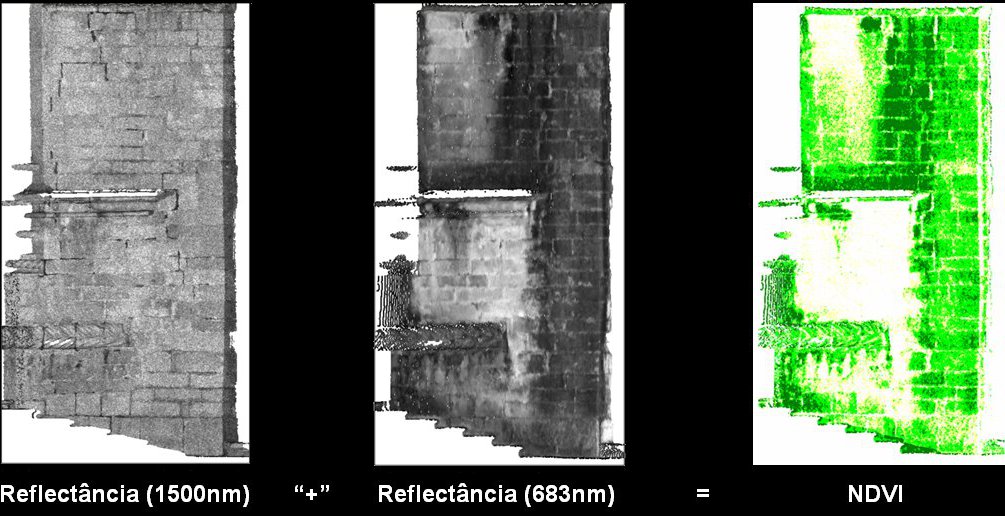 The palace and Quinta de Valflores are a testimony of sixteenth century Portuguese architecture. With 3D laser scanning survey it was possible to study and analyze the deformation of masonry walls. 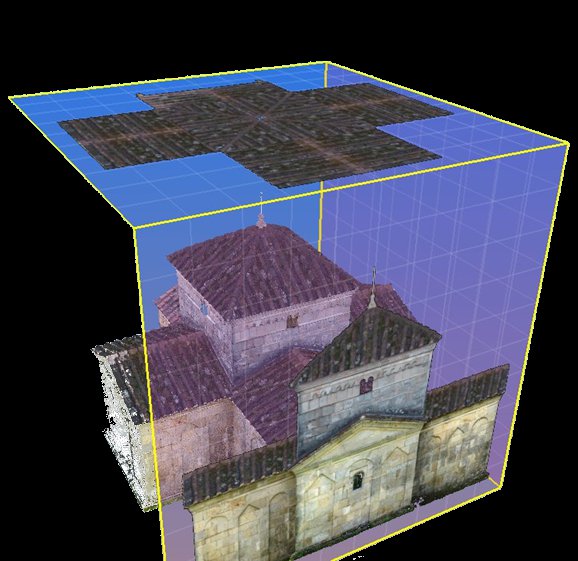 The acronym SFM means Structure From Motion. It is a photogrammetric methodology to 3D reconstruction from multiple images separated by small base distances. The examples presented here were produced with the SFM toolkitprovided by Henri Astre and Photosynth, and Visual SFM (VSFM) by Changchang Wu. The SFM toolkit is a collection of applications that implements the Bundler algorithm by Noha Snavely and cmvs+ pmvs by Yasutaka Furukawa and Jean Ponce. The first algorithm enables the relative orientation of the images and the latter are MVS (multi-view stereo) algorithms for dense point-cloud generation. 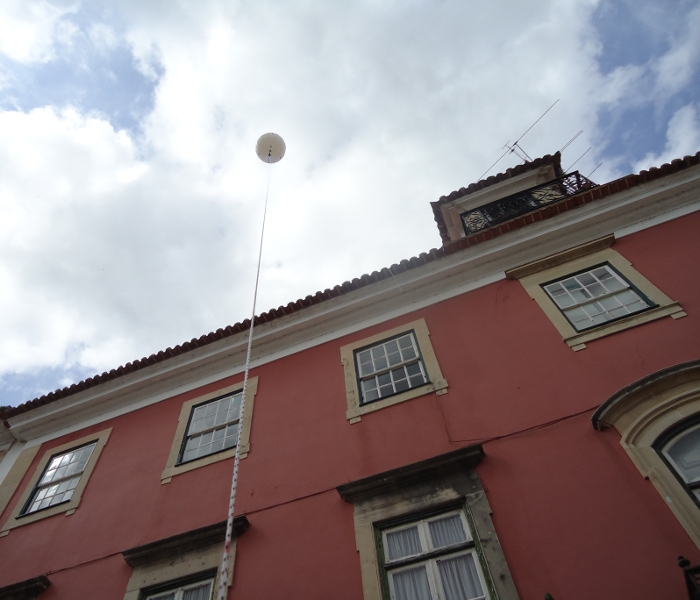 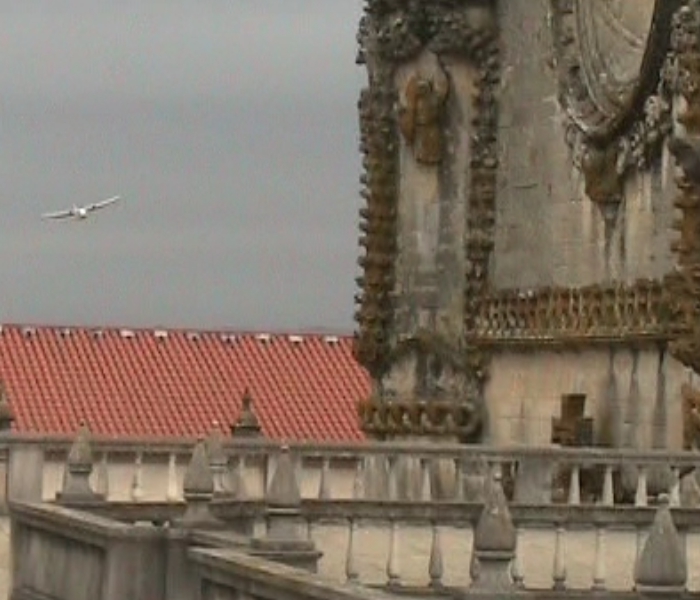 The following VRML models represent 3D reconstructions done with SFM software. On the left we have a sparse 3D point cloud of the city of Tomar (1154 images). This was done with an SFM toolkit provided in internet by Henri Astre. The yellow dots correspond to ballon stations. On the right we have another sparse 3D point cloud model of Convento de Cristo of Tomar (195 images). This was done with Photosynth.

In the image bellow we have a partial view of a dense reconstruction of the historic centre of the city of Tomar done with the above mentioned PMVS+CMVS. 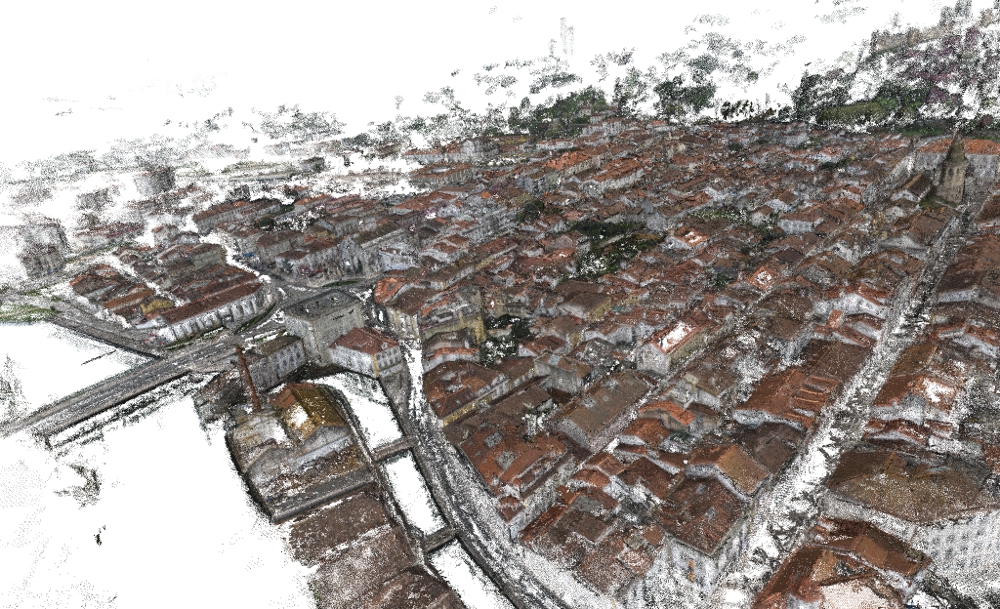 This chapiter was automatically reconstructed with 32 images using the SFM toolkit. It is a point cloud model with about 8.6 million points. 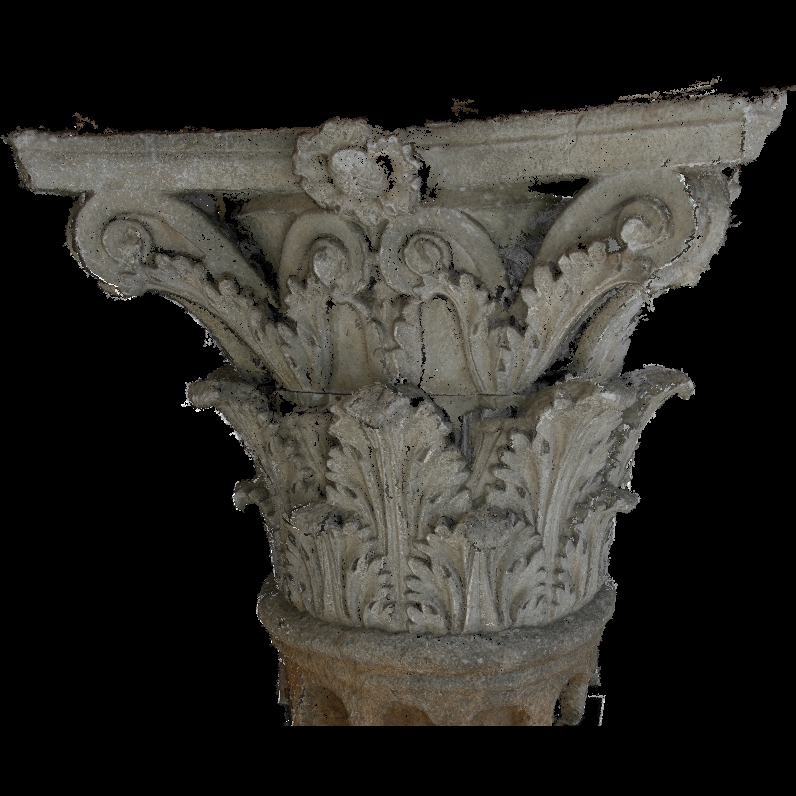 For low-cost photogrammetric methods we refer to the rectification of images and drawings. Briefly, the perspective effect is removed of the images via a projective transformation. After this transformation, and put on scale, the image acquires metric properties making it a useful tool of analysis, interpretation and measurement. Below are some images of the case studies where that have been applied such techniques.

Pátio dos Carrascos at the Convent of Christ in Tomar.

The façades of the blocks of Terreiro do Paço.

The Information System for registration of architectural and urban heritage, accomplishes two strategic goals:
- Provide detailed recording of the cultural heritage;
- Provide information for the management, for project development and dissemination.
The information system was defined with the aim to gather, store, process and provide relevant information about the heritage recording. The information system defined for this project incorporates not only the creation of databases to accommodate the physical and intellectual information, but also has the concern to create, store and organize digital objects that may be useful in the present and preserved for future use and the definition of a set of metadata to structure and standardize the information used.
It was decided that the system is based on client-server architecture, accessible via a web platform with the following basic principles of operation:
- Allow mapping of the existing heritage records, preserving them in digital format with the utmost rigor and detail as possible;
- To enable its visualization to query and spatial and environmental analysis;
- Act as an element that helps to strength and promote the preservation and valorization of heritage.
For the record and dissemination of heritage, it was developed a web application, since this platform makes the application independent of the software on each workstation all stations now have a browser installed) and also because the Internet presents itself as the infrastructure current structure, most used and most suited to the dissemination of scientific, cultural and educational, worldwide.
Through this application it is possible for any user (specialized or not) to have access to a wide range of information about the archaeological and architectural heritage, photos, graphic documentation, literature and even the 3D models created.
This application is the visible tip of the iceberg, since the designed information system can support the various processes, from the collection and storage of data to the study, processing and visualization, and can feed any portal of buildings and monuments ever created or to be created.
The development of the information system was majorly done by the University of Minho. The following image represents the front office application and its menus. 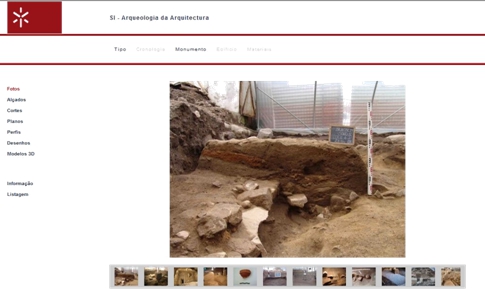